It’s still incredibly beautiful here. I forgot. In the spaces between the rains the sky runs and falls; gathers itself and plunges again towards the sea. Cumulonimbus titans strike their shins on the horizon line as they stumble through the Mediterranean, dead drunk and anxious to reach Ithaca. This is a place where mothers still name their sons Ulysses.

The houses are like barnacles on a rock; roof tiles buried in lichen and slathered with concrete where they meet at the crown in an uneasy sea-sick ridge. Below the rust-eaten white iron boundary of the balcony-rail I can see two flaps of a prickly pear struggling out from between two heavy arcs of terracotta.

Morning light on the Ionian Sea from Piazza Belvedere

The edge of the sky at dawn over the water is like Montale’s description, a singing strip of metal lath, a kite string straining against the rebounding vault of blue. His was the western sea, the Ligurian coast, a sunset light. Here the Ionian dawn makes eastern music…Jove’s mute mistress writes her name in the sand with a round hoof…IO. 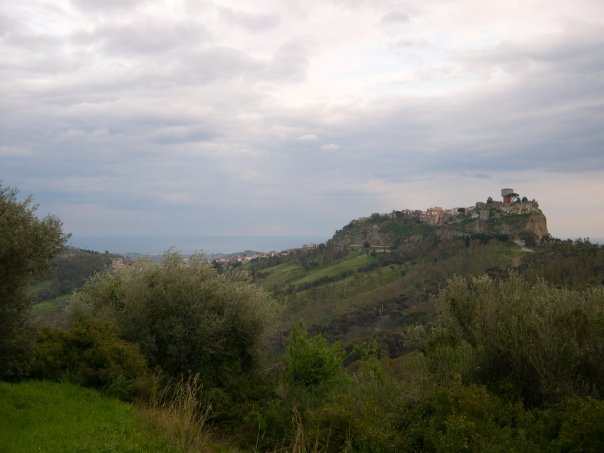 Looking up at Caulonia Superiore from the East.

View all of bonniemcclellan's posts.

This site uses Akismet to reduce spam. Learn how your comment data is processed.