Today there is sun! Though I saw Monte Rosa full of snow this morning as Matthew and I were driving from Gemonio to Castello Cabiaglio where he’s painting a the living room of an antiques dealer. I was tagging along to finally see the house where Matthew has done quite a bit of work. Amazing, same era as the one we live in (end of 19th beg. 20th cent. here the style is called Liberty). Unlike ours, his is furnished with beautiful stuff of the era or older all in amazing condition. Like ours, his house has a zillion windows facing south that are paned with the glass of the era, full of subtle bubbles and ridges that make a room full of light look like you’re standing underwater. Every shadow rendered aqueous.

The antiquarian has a huge Venetian chandelier from 1780(ish) and a few of the glass bits were broken. Last night, Matthew brought them for me as a present. There is something amazing about holding a piece of hand blown glass that is 250 years old, something that says one shouldn’t throw it away even if it can’t be used for its original purpose. We have plans to make a steel structure gilded with white gold leaf to hold up these two pieces of glass that make the shadow of fire look like water. 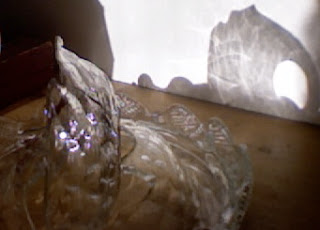 View all of bonniemcclellan's posts.

This site uses Akismet to reduce spam. Learn how your comment data is processed.